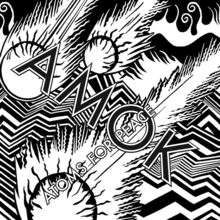 "Producer Nigel Godrich has made of this a modern masterclass--and one that sets the bar for collaborations extremely high."
Mixmag