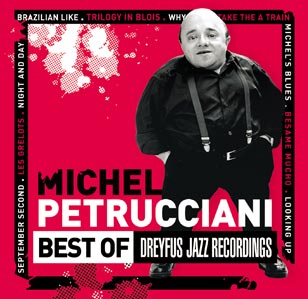 A compilation containing 10 of Michel’s most popular recordings, Best of Dreyfus Jazz Recordings features “September Second” and “Take the ‘A’ Train” with Steve Gadd and Anthony Jackson (from Trio in Tokyo); “Les Grelots” with Eddy Louiss (from Conference de Presse); “Night and Day” with Stéphane Grappelli, Roy Haynes, and George Mraz (from Flamingo); “Brazilian Like” with Steve Gadd, Anthony Jackson, Bob Brookmeyer, Flavio Boltro, and Stefano Di Battista (from Both Worlds); “Trilogy in Blois” (from Piano Solo – The Complete Concert in Germany); “Why” with Dave Holland, Tony Williams, and The Graffiti String Quartet (from Marvellous); “Michel’s Blues” with his father Tony Petrucciani (from Conversation); “Besame Mucho” (from Au Théâtre des Champs-Elysées); and an extended “Looking Up” with Marcus Miller, Biréli Lagrène, Kenny Garrett, and Lenny White (from Dreyfus Night in Paris).

"An outstanding overview of the diverse, but well-grounded musical palette and channeled technique from which Petrucciani created vivid jazz piano improvisations."
All About Jazz