FOR THOSE ABOUT TO FUNK / Mo Blow 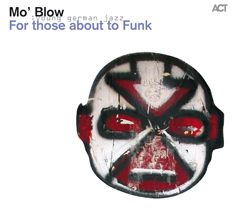 Germany is not exactly known as the home of soul and funk, but after you’ve heard Mo’Blow from Berlin you will think differently about the country where the ‘1’ and the ‘3’ are becoming more and more prominent. The quartet, which the ‘Berliner Zeitung’ described as one of the hottest club bands, has the groove in their blood. With For those about to Funk, their debut album on ACT, Mo’ Blow ticks all the boxes for the label’s Young German Jazz series: refreshingly new, exciting and unconventional, with that certain something and of an international calibre.

Mo’ Blow puts jazz into motion, and "For those about to Funk" is a brilliant display of how energetic Young German Jazz can be.