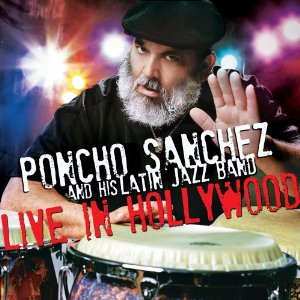 Master conguero, band Leader and Latin Jazz legend Poncho Sanchez celebrates his 30th year with Concord Picante Records with 'Live in Hollywood', recorded at the Hollywood and Highland Center in July 2012.
Poncho Sanchez and his Latin Jazz Band open with the swinging tune 'Promenade' and this is quickly followed by a medley of their best-known tracks. Other highlights include a high-energy rendition of "Afro Blue" that serves as a tribute to the late conguero Mongo Santamaria, who was a good friend and important influence on Sanchez. The album maintains a hot pace throughout, finishing with an up-tempo salsa number 'Son Son Charari'.

"This album reflects not only a grand anniversary, but the dizzying ability of Sanchez's Latin Jazz Band to play anything it wishes with consummate swing and soul."
All Music