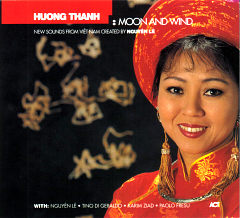 Moon and Wind, her first solo album, created by her producer and friend Nguyên Lê, provoked many a surprising encounter: on "One River, Two Streams", a lovesong which probably goes back to the 15th century, Huong Thanh sings accompanied by the Berber gumbri player (2) Karim Ziad. (He owed her that one: she sang on the Maghreb & Friends album, 1998, ACT 9261-2). The Soaring of the Heron, a melody all Vietnamese people have sung, hosts an unexpected guest: Tino di Geraldo, ubiquitous Flamenco artist from Madrid, with his palmas (3) and his cajón (4). Happy accident, not so accidental, as it were, for it seems that both musical sensibilities blend into one intense emotion: Huong Thanh’s voice is reminiscent of flamenco’s sensuality.

New Sounds from the World
"Let us redefine World Music as the new identity the children of the diaspora are building between the streams of today and the search for the deepest tradition. Since we live here, we have integrated the tools of the West to create our own culture. From Tales from Viêt-Nam to Moon and Wind, I have always tried to weave together the threads of those encounters where each one, with his own culture, can give the best of himself. So many things are yet to be shared ! "

"Some of the best music being made in today´s shrinking world: absolutely rooted, modern as it gets. Killer album!"