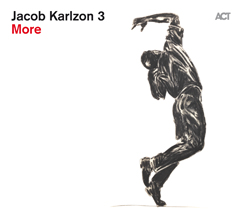 "More" is the group's second album. Intriguingly, the liner notes open with the suggestion that German heavy rock band Rammstein is a musical reference point. After listening to the album's ten tracks the comparison is even more intriguing, for none of the music comes close to Rammstein's brand of doomy metal—even the band's cover of "Here To Stay," by American rockers KoRn, maintains a distinct lightness of touch in comparison to the original's sledgehammer attack.