NOTHING CAN STOP US / Robert Wyatt 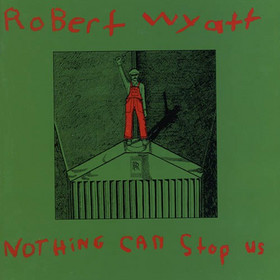 In the early 80s, Wyatt released a series of singles of cover versions. The set was recorded with a straight, simple, beauty informed by the experience of geopolitics just as the term was being invented. "Arauco" drew on the street 'mass songs' of a Chile protesting at the imminent arrival of Pinochet. "Stalin Wasn’t Stallin'" was a playful resurrection of a barbershop quartet that sincerely, and unbelievably, aligned the USA with the Soviet Union. Most startling of all was Wyatt’s version of Chic's "At Last I Am Free." Breathless and hymnal it gave pause for thought for anyone who liked to use the words personal and political in the same sentence.

"Surprisingly, Nothing Can Stop Us may be one of Wyatt’s most focused works."
Pop Matters