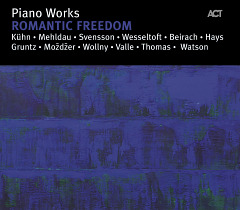 Solo performance in jazz: that’s a test that puts you through your paces. No rhythmic cushion to make you feel comfortable, no musical partner to allow a creative interplay – just the instrument on its own, with which the player must achieve a range of colour and a swinging elasticity. Nowhere is the tradition so rich and diverse as in the jazz discipline of "piano solo". From the early virtuosity of Art Tatum to the marathon solos of Keith Jarrett and the radical improviser Cecil Taylor, piano solo performances have developed to such a level over more than half a century, that they can take the breath away of both listener and fellow pianists. To this can be added those who regarded the piano as a second instrument, such as bass colossus Charles Mingus, who knew that piano solo could unfold a timeless and fascinating expressiveness.

PIANO WORKS: The King of Disciplines in Jazz from ACT Records