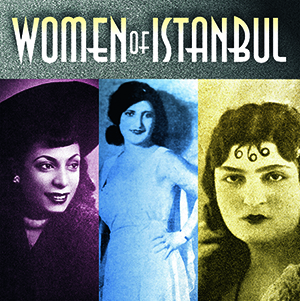 With the western reform of the 1920's the equality of the sexes also came to the fore in Turkey, with women encouraged to enter public sphere as never before. In the music world, women became even more visible, especially in the cabaret style night clubs and music halls which proliferated in Istanbul between the 1920s and 1940s. The number of female singers recorded in this period such as Müzeyyen Senar, Hamiyet Yüceses, Perihan Altındağ, Sabite Tur, Suzan Yakar, and Zehra Bilir is astonishing. The singers presented in this collection, some famous, some long forgotten, do not begin to represent all of the women of the early Turkish recording era since this collection focuses on the folk repertoire, light classical songs, and light urban lieder which became the popular music of Istanbul's nightclubs and theaters and constitute the majority of the recordings documented between 1927 and 1940.

All but four recordings in this collection, now available in vinyl, come from the Sahibinin Sesi catalog, which became the most prestigious recording company in Turkey until the mid 1970's. In most cases the compilation used original metal masters, while some tracks were taken from test pressings or well-preserved copies of collectors. This collection of archival material brings together the best women singers of Istanbul during the golden era of gazino clubs from 1920's through 1940's.

"Here's a real labor of love, and venture back to the roots."
All Music