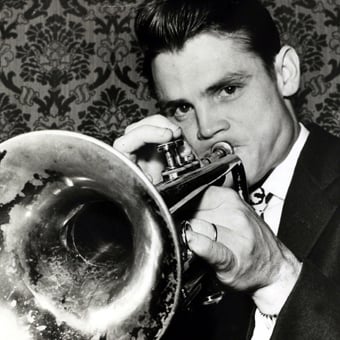 Chet Baker, born in 1929, started his career in the late 40's. He become famous with the Gerry Mulligan Quartet in 1952. His solo in "My Funny Valentine" is a classic of the west coast jazz in the 50's. When Mulligan was arrested in 1953, Chet let the group until 1955, when he went to Europe. He also sang on many records. In Europe he recorded with many musicians in different countries.

His career was interrupted many times for personal problems with drugs and he was arrested many times for his addiction. In 1974 he come back to music after three years in obscurity, playing in a concert in Carnegie Hall with his old friend, Gerry Mulligan. After this he started a "new career". In 1983, British singer Elvis Costello, a longtime fan of Baker, hired the trumpeter to play a solo on his song "Shipbuilding", from the album Punch the Clock. The song was a top 40 hit in the UK, and exposed Baker's music to a new audience. Later, Baker often featured Costello's song "Almost Blue" (inspired by Baker's version of "The Thrill Is Gone") in his live sets, and recorded the song on Let's Get Lost, a documentary film about his life. His death in 1988 today is still a mystery.

"He was a supreme melodist who brought a singing lyricism to every vocal and instrumental phrase."
New York Times