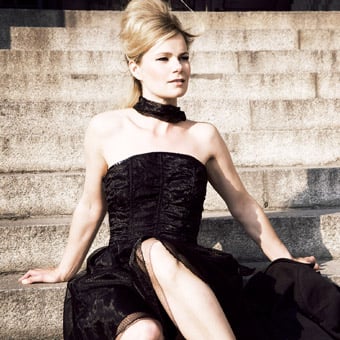 Being brought up with music there was no surprise when she proved to have an extraordinary vocal talent. Already at the age of 16 she ended up in third place in the Eurovision Song Contest 1995. Jessica was immediately offered to sign an album deal, something she rejected. This kind of pop was not her style and instead she went to study for two years at the famous jazz-school ”Fridhem”.

At the age of 20 she went on tour as a member of the band with Robyn, the internationally renowned R&B artist from Sweden. Her producing team recognized Jessicas unique talent and immediately arranged for a record deal and her first album was released under the artistname of ”ISA”. The album made a great impact in Japan with more than 50.000 units sold. This, being an R&B album was still far away from her longing to sing jazz and at the end of the year, when she realized that once again she took a step back from the spotlights and decided to concentrate on the music she really wanted to do.

During the years to come she toured with Swedish saxophoneplayer ”Per Texas Johansson”, made guest appearances with Nils Landgren, as a lead vocalist with Kid Creole and the Coconuts. She’s back with her music, recording with her favorite musicians and best friends, such as Nils Landgren, Dan Berglund, Wofgang Haffner, Johan Norberg, Jonas Knutsson, Jesper Nordenström and Jan Robertsson.

"The unpretentious air of her voice, her relaxed composure, the melancholic and laid-back way she sings cause everybody to listen attentively. "
Jazzdimensions