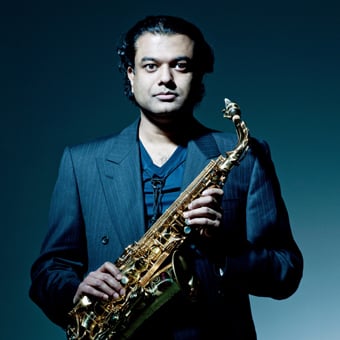 He is one of the most innovative young musicians and composers in jazz today. Named Alto Saxophonist of the Year for 2011, 2010 and 2009 by the Jazz Journalist Association, Rudresh, now living in New York, has incorporated the culture of his Indian ancestry and has fused myriad influences to create a truly groundbreaking artistic vision. As a performer, he leads/co-leads seven groups to critical acclaim. As a saxophonist, Mahanthappa has achieved international recognition performing regularly at jazz festivals and clubs worldwide. As a composer, Rudresh has received commission grants from the Rockefeller Foundation MAP Fund, American Composers Forum, Chamber Music America, and the New York State Council on the Arts to develop new work.

"Stimulating, open-minded, and never pretentious."
All About Jazz