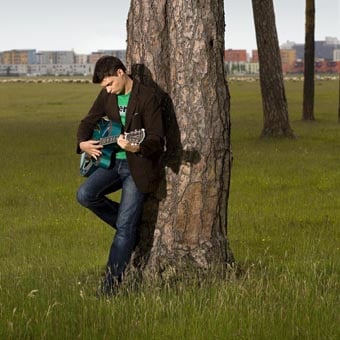 Torsten Gutknecht was born in 1980 in Düsseldorf. His first steps as a guitarist were typically influenced by rock and pop. While he was still in school he attended workshops given by Jim Hall and John Scofield in New York, and took lessons with the virtuoso gypsy guitarist Bireli Lagrene in France.

In 2000 he became a member of the German Youth Jazz Orchestra and in 2001 he recorded the first album under his name Manhattan Walls. In 2005 Goods was the only European to be chosen by Herbie Hancock and Wayne Shorter for the final round of the “Thelonious Monk Jazz Guitar Competition” in Washington D.C. Since then Torsten Goods has been touring extensively throughout Europe, Asia, and the USA. During this period he has worked with the likes of Bob James, Chris Potter, James Genus, Terri Lyne Carrington, Barbara Tucker, Dawn Tallman, Marcus Fugate, Jimmy Bruno, John Ruocco, Johannes Faber, Leszek Zadlo and Patrick Scales.

Goods is not only equipped with a virtuoso guitar technique – he also has an exceptionally sensitive and expressive singing voice that is at home with the blues as well as swing and pop.