Thumbs up for "Dameronia with Strings" 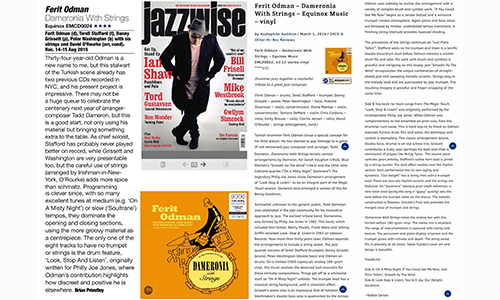 Ferit Odman's recent album "Dameronia with String" is receiving well reviews from various magazines and websites. Recently awarded with 4 stars by UK's Jazzwise Magazine, Brian Priestley wrote that the album did not only use Tadd Dameron material but brought extra to the table. Michael Fremer, who is known through Analog Planet, Stereophile Magazine, The Absolute Sound also reviewed the album and wrote that "it will make you feel good from the first note of “On a Misty Night” to the second side ender". Audophile Audition gave the album four and a half stars and wrote that "Dameronia With Strings raises the analog bar with this limited edition 180-gram vinyl".