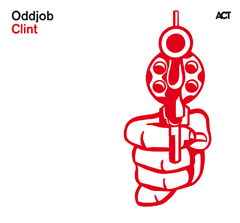 “On Clint we wanted to capture the moods of Eastwood’s films,” says Goran Kajfes. The album begins with “The Good, The Bad & The Ugly”, the famous spaghetti western classic from Sergio Leone. Eastwood became an international star as the laconic western hero who appears out of nowhere, fights for law and order, and then disappears again - as The “Man With No Name” he created an almost mythical figure in cinematic history. Oddjob develops Ennio Morricone’s famous theme using a hammering synthesizer and a drum machine beat before trumpeter Goran Jajfes and saxophonist Per ‘Ruskträsk’ Johansson assume the main theme. Alongside director Don Seigel, in the early ‘70s Eastwood created Dirty Harry, who was to become another important figure in his film career. Harry Callahan is a policeman in San Francisco, a silent loner similar to Eastwood’s western hero. Yet the music, written mainly by Lalo Schifrin, is threatening, disturbing and matches the hectic life in a big American city. Oddjob modernises “Palancio” from Magnum Force into a contemporary urban sound, in which Janne Robertson’s feverish nervous drums are superimposed by Goran Kajfes’ trumpet. The theme from Magnum Force begins with a solo from Per ‘Ruskträsk’ Johansson on the bass clarinet, dark and abysmal and corresponding to the places where Callahan chases after criminals - dark narrow alleys and bleak backyards where evil lurks.