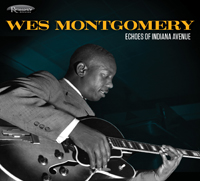 "Montgomery is among a handful of guitarists at the top ranks in the 20th century."
New York Daily News