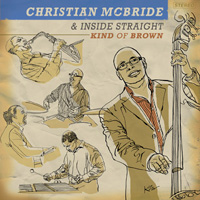 "Kind Of Brown" is one of many projects that McBride has set into motion for 2009, which marks his 20-year anniversary since his arrival on the international jazz scene. Other endeavors include the innovative “Conversations With Christian” interview-duet performance series available as digital downloads culminating into a full 20 song album, plus a summer big band residency in New York. While the quintet’s performances had been limited to the weeklong Vanguard stint and one-off shows at the Monterey Jazz Festival and in Brazil, McBride and his new ensemble Inside Straight will be on the road throughout the year performing songs from "Kind Of Brown".

"His sound is crystal-clear throughout the range."
Guardian