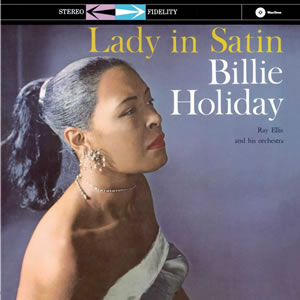 Originally released in 1958, this is the penultimate album completed by the singer and last released in her lifetime. The song material for Lady in Satin derived from the usual sources for Holiday in her three decade career, that of the Great American Songbook of classic pop. Unlike the bulk of Holiday's recordings, rather than in the setting of a jazz combo Holiday returns to the backdrop of full orchestral arrangements as done during her Decca years, this time in the contemporary vein of Frank Sinatra or Ella Fitzgerald on her Songbooks series. The album consists of songs Holiday had never recorded before.

"You can almost hear the tears being shed by Billie Holiday on most tracks."
All Music