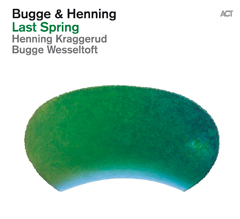 During a conversation between ACT owner Siggi Loch and Norwegian classical violinist Henning Kraggerud, the latter stated his admiration for Bugge Wesseltoft's christmas record "It's snowing on my piano" (ACT's best-selling title, fact fans). So naturally the next step was to bring the two countrymen together, and so it was that they met in November 2011 to record "Last Spring" in Oslo's famous Rainbow Studio, the place where "It's snowing on my piano" was recorded. The pair put together a sparkling program of 16 pieces for "Last Spring", which is founded mostly on Norwegian folk music. As the title intimates, "Last Spring" is a revisiting of spring. It is not an exulting, whirling awakening, but a sustained, minimalistic meditation, oriented strongly towards the details, the variance of the melodies, the breadth and beauty of the sound.

"What truly stands out on Last Spring, beyond the playing—which contributes to what may be the year's most sublime and unapologetically lovely album—is the sound."
All About Jazz