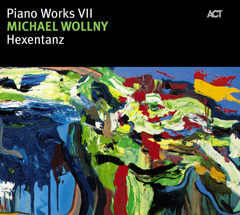 And it is enthralling music that we are entitled to expect from this young German star of the jazz piano. Few jazz musicians of his generation have received comparable recognition in the jazz press over the last two years. The “Financial Times Deutschland” describes him as a “comet of the German jazz scene” and the British magazine "Jazzwise" takes it for granted that "Wollny could well become a major talent in European jazz“. Thus, it was no accident that Call it [em] (ACT 9650-2), the impressive 2005 debut of his trio, set the tone for the successful ACT series “Young German Jazz”. His duo recordings (Melancholia ACT 9433-2 and Certain Beauty ACT 9442-2) with Heinz Sauer, the icon of German jazz saxophone and Wollny’s elder by 46 years both won important prizes not only in Germany. Reviewers were hearing “great European jazz” in his recordings – and all of them agreed that here was a musician who combined a technical brilliance with an extensive and unique musical conception, a musician with a gripping expressiveness. An artist whose fabric resonates with the aesthetical complexity of the contemporary world and who knows, and has assimilated, musical traditions from Bach to Cage and Tatum to (John and Cecil) Taylor. An improviser without inhibitions, who can create from within or without tonality and the world of mainstream jazz. Wollny creates his own musical universe, a language of a kind that only a musician who grew up with Björk, Jarrett and Ligeti simultaneously can create.

A highly fascinating trip out into an entirely new world of wild angularity, enchantingly tender moments and oppressively spooky moods. "Wollny is on his way to become a major talent in European jazz."