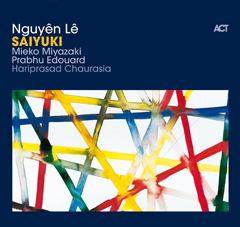 In 1993, the Frankfurter Allgemeine newspaper said of Nguyên Lê’s first appearance in Germany: “There is nobody else that plays guitar like he does!” These words still ring true today, a fact to be heard on his latest release for ACT, Saiyuki. For the acclaimed Parisian artist, new worlds are constantly unfolding and Lê is consistently able to amaze us anew with sound. This is even more amazing because he is already one of the great sonic explorers in the jazz world: one who embarks on flights of the imagination in order to investigate new combinations of sounds. Saiyuki is very explicitly a journey: one from east to west and west to east in, as Nguyên Lê himself puts it, an “Asia without borders”. In trio with the Japanese koto player Mieko Miyazaki and Indian tabla virtuoso Prabhu Edouard, his new CD for ACT takes off on a musical Silk Road that binds diverse Asian worlds together.

Vietnam, India and Japan, the origins of the musicians involved, create a magical triangle in which sounds move toward each other and find new forms, culminating in a scintillating encounter of identities.