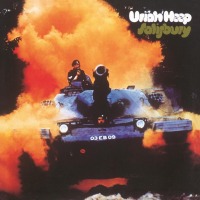 Perfectly combining Heavy Metal and Prog Rock, Uriah Heep proved on their second album Salisbury (1972) that they were the undisputed flag bearers of the British Prog Rock movement. The album's title track is a 16 minute long jam on the B side, which shows the diversity and musicianship of these guys.

Absolutely unique about the Music On Vinyl reissue is the bonus LP, which contains a wealth of previously unreleased tracks and single edits. It also contains "Simon The Bullet Freak", a track that was released in the US but was not included in the UK tracklisting. The gatefold sleeve sports the original UK artwork. Heep fans will undoubtedly love it!

"Salisbury tips the band's style in the prog direction, containing one side of songs and one side dominated by a lengthy and ornate epic-length composition."
All Music