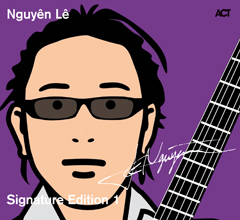 Nguyên Lê opens his Signature Edition with a kind of prelude: the previously unreleased track “Magic Constant” introduces the listener to his incomparable musical kingdom, full of very different landscapes. “I am the personified fusion of cultures,” once he said, and his compositions and interpretations certainly combine forms, styles and elements in a previously unknown, unheard way. There are pure classic adaptations (for instance on the traditional “Lo Rossinyol”) as well as abstract clusters of contemporary music; many pieces are defined by Vietnamese music traditions: By its - for Western people - unfamiliar harmonies, by the archaic sounds of the traditional one-string-instrument Dan Bau, and by the mystical, haunting voice of Huong Thanh, with whom Lê has made four albums for ACT.