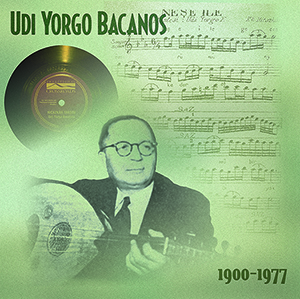 Udi Yorgo Bacanos is the pioneer of the modern Turkish oud style. He is the kind of musician that musicians listen to. If the great blind master Udi Hrant was the soul of the oud, then Yorgo was the intellect. With his technique and innovative style he is undoubtedly one of the best instrumentalists of Turkey and has been admired by virtually every middle-eastern musician of his time and ours. This tribute, long overdue, serves as a testament to his genious for music fans and udists for decades to come.

Yorgo Bacanos was born in Silivri, near Istanbul on 1900. Gazino (nightclub-cabaret) playing would remain an important part of his career, though Yorgo performed on the Turkish Radio as early as 1927. He performed and recorded with the most renowned musicians of the day, including Mesud Cemil Bey, Münir Nurettin Selçuk, Sadi Işılay, Nubar Tekyay, Isaac Algazi, Ahmet Yatman, Şükrü Tunar, Zeki Müren, Haydar Tatlıyay and in Greece with Barba Yiantso, Lambro Savaidi and Lambro Leonti. In the 1920s, Yorgo travelled throughout Europe, Middle East, Egypt and recorded some of the earliest recordings for Odeon and later for Turk Gramophone (HMV) and Columbia, though many of his most brilliant performances were recorded only for radio broadcasts. This collection, now on vinyl, includes his landmark recordings from 1920 to 1960, as well as rare radio broadcasts of his most famous performances, never before issued commercially.

"...a historical figure who changed the instrument's place in the musical world forever."
Amazon