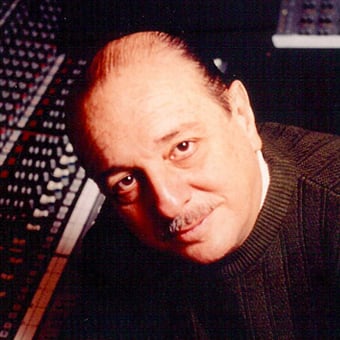 Arif Mardin was born in Istanbul in 1932. He was a Turkish-American music producer, who worked with hundreds of artists across many different styles of music, including jazz, rock, soul, disco, and country. He worked at Atlantic Records for over 30 years, as both an assistant, producer, arranger, studio manager, and vice president, before moving to EMI and serving as vice president and general manager of Manhattan Records. His collaborations include working with Queen, The Bee Gees, Anita Baker, Aretha Franklin, Bette Midler, Laura Branigan, Chaka Khan, Scritti Politti, Phil Collins, Daniel Rodriguez, Norah Jones, Richard Marx, Culture Club and Jewel. Mardin was awarded 11 Grammy Awards within his lifetime. He passed away in 2006 at his home in New York after a lengthy battle with pancreas cancer.

"All My Friends Are Here was a labor of love that just scratches the surface of the genius that was Arif Mardin".
David Bowling