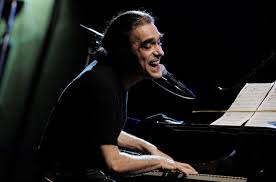 A native of Turkey, Fahir Atakoğlu is an international award winning composer and pianist well known in the fields of large symphonic works, film music and jazz. His works have been performed in various music festivals in Europe and The United States to critical acclaim, and he is considered one of the most outstanding pianists and composers in the world today.

Fahir was recently honoured (2015) as one of the 50 Most Influential Turkish American Artists. Since 1986, Fahir has composed jingles, documentary and film music for many national and international productions. For his work in film composition, he won first prize for “Documentary Music Compositions” at the Milano Film Festival as well as “Outstanding Achievement in Arts Award”, Platinum Sales awarded by EMI Greece, Telos Dios Telosfor sales in excess of 480,000 and he won “The Best Song Award” from the Mega Channel in Greece.  Most recently Fahir Atakoğlu scored and composed the soundtrack of the TV Drama entitled “Magnificent Century” (“Muhtesem Yuzyil”).  Fahir’s virtuosity can be further demonstrated with the music that he composed for the Istanbul National Ballet’s performance of“East Side Story”.

Also an accomplished solo artist, Fahir has released 17 albums since his solo debut in 1994, and he maintains an intense international touring schedule in Europe and the USA, including his recent sold out shows at the world renowned Kodak Theatre in Los Angeles, and Carnegie Hall in New York City, proving his worldwide appeal.

One of the outstanding pianists and composers in Europe today . . .At the cutting edge of the world music.”

“This [Live at Umbria Jazz] is true trio music, carefully considered and daringly presented. It possesses its own inevitable momentum and destination. A superb disc.”

“Atakoğlu's playing can be described as percussive precision, a precision that extend to his careful arrangement of the bass and drum parts. These performances are no mere blowing sessions. They are carefully crafted tone poems delivered with a muscular virility and near scientific exactness. “

“Fahir Atakoğlu is a musical polyglot from Turkey, who is as at home with classical, jazz, and popular music as he is producing tunes for commercials, ambient background, and soundtracks.” – All About Jazz – July 8, 2016

·       “Atakoğlu’s Live at Umbria Jazz forges a bridge between East and West in a sonic summit unfettered by boundaries.” -- JazzIz – Lissette Corsa, June 2016

·      “It’s easy to get lost in Turkish-American pianist Fahir Atakoğlu’s vertiginous compositions, characterized as they are by an unbridled elegance and billowing mystique.”

·      “Throughout the set, the musicians vigorously introduce influences from Afro-Cuba, the Middle East, Europe and North America to create contemporary world jazz

of the highest caliber.”

·      “The live recording captures the magic of these technically gifted musicians whose onstage chemistry transcends geographic and musical borders.”

·       “Newly released but recorded some six years hence, the lyrically and technically adept leader is joined by rhythm section bad boys Caron and Hernandez, and while neither is short on subtlety or muscle, they deploy both with keen intelligence.”

·       “Maybe the most intimate and brilliant critique on Turkish-born jazz pianist and composer Fahir Atakoğlu and his music! It takes you to his childhood and brings all the flavors he possesses onto the table with utmost wisdom on how to write a critique. If you are a fan of Atakoglu, you'll definitely and finally understand his ins and outs, how he became one of the "unique" jazz musicians that ever lived, bringing all those myriad inspirations starting from his homeland all the way to the heart of jazz. I loved it.  . . . completely astonishing!”

·      “Its (“Live at Umbria Jazz’”) tunes are melodically complex but filled with clever hooks and delivered with a joyous abandonment by Atakoglu and Cuban drummer (Horacio “El Negro” Hernandez) and electric bassist (Alain Caron).”

·      “This is music that ebbs and flow organically. It is music of tension and release. But most of all, it is the sheer range of different musical experiences that Atakoglu’s brings to bear that really sets his music aside from the pack.”-- All About Jazz – Duncan Heining – May 3, 2016

·      “Recorded in the Teatro Morlacchi, Perugia’s wedding cake of an opera house, “Live” is one of those records that makes you wish you’d been there.”

“If” made for a very impressive opening statement. At times, there is almost a Mozart-like quality to some of the melodies but then the Austrian had been influenced, to a degree at least, by the Turkish music of the Mehter, the elite Turkish military bands of the Ottoman empire. --All About Jazz – Duncan Heining – May 3, 2016

and a complete expression of his virtues and values in music.”

·      "The chemistry between Atakoglu, Caron, and Hernandez on this live date is exemplary, and pushes the boundaries of the piano trio ensemble. They not only complement each other's improvisations, but meld into a singular cohesive unit exhibiting

a high standard of flamboyant musicianship on a global scale."

·               “The playing is also informed by exceedingly melodic inflection and is curvaceous, natural and discreetly sensuous; the tonal palette is unfailingly refined and the

further than he might have on any other occasion. Add to that the superbly captured

sound and you have a truly unforgettable experience on record to enjoy again, and again ”

• “International award winning composer, Fahir Atakoglu is a much‐esteemed composer in Europe and Turkey in the fields of large symphonic works and film music. His works have also been

performed in various music festivals in Europe and across the United States to much acclaim.”

• "…Moreover, Atakoglu's taped score sounded utterly at home in every style, with lush symphonic lyricism layered over invigorating folk rhythms. As in Istanbul itself, you journeyed from

Europe to Asia and back without ever leaving a unique environment.

• “Atakoglu composed all the tunes on If.A very original melodic approach flows through the always interesting and often intense rhythmic drives, taking this piano trio to places that you've

probably never been before.” Dan McClenaghan, All About Jazz

• “The result is more jaw dropping music from this most awesome, brilliant, death defying pianist who deserves a ton of wider recognition and admiration.  “There's a lot to enjoy on this recording

[Istanbul in Blue] from a contemporary and historical standpoint, and as listeners

should definitely own a copy of "If," this one shows a willingness to expand, employ

different styles, and bodes well for Atakoglu's next adventurous excursion.”

nod to the timeless city that stands as Atakoglu's eternal source of inspiration.”

• “There's music encapsulated here to suit varied taste and that’s because of Atakoglu’s expansive piano expertise. He has the ability to make his instrument sound classical one minute,

ragtime nuances that slip in for good measure.”

• “Intriguing collaboration between stellar set of fusioneers and a composer who’s at home in the east and west and both the commercial and art world...” Andy Robson, JazzWise,England

• “It is that inherently lustful quality balanced with good common sense and spectacular musicianship that identifies Faces & Places as a pure personal statement, and a continuing novel

with the diversity Fahir Atakoglu has always enjoyed. It's a beautiful statement of

Perhaps reflecting both personal experience as well as Turkey’s position as a cultural crossroad,

a certain Middle Eastern rhythm in Atakoglu’s music is not far from, for example,

• "Faces and Places" simply intoxicates the listener with a kaleidoscopic masterpiece of moods, colors and textures. It's a killer CD from a killer group.”  Alonzo Veston , stjoenews.net

• “In Faces & Placeshis music is just so chock full of energy and chops that you wonder how come this kind of stuff isn’t played more often… Music that energizes like a Duracell!”