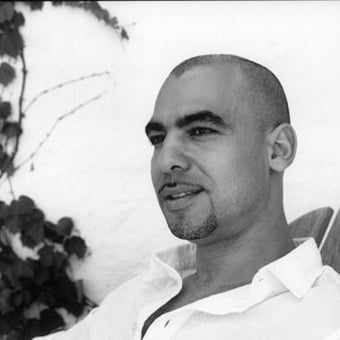 His musical path is atypical. At age four, he was offered a Gwoka drum, and Anzala showed him how to play the seven fundamental rhythms -Toumblak, Graj, Lewoz, Kalagya, Padjanbel, Mende, Woulé. At age six, while living in Switzerland, he discovers Jazz music through his best friend’s dad record collection. Fascinated, he self teaches the guitar by playing along with records. By age eleven, he sat in with the players of the local Lausanne scene, but soon after, his family relocated in Guadeloupe. There, without a jazz scene, he concentrated on his studies and eventually landed a job as a Senator’s assistant in Paris. At twenty-four he abandoned his nascent career to attend Berklee School of Music.

After he graduated from Berklee, and developed a reputation by playing with acknowledged leaders of the Boston jazz scene, such Danilo Perez, Bob Moses, Giovanni Hidalgo, before leaving for New York City. One week upon arriving there, goes to hear Chucho Valdes, Roy Hargrove and Randy Brecker perform at Bradlee’s Jazz Club. In a moment of boldness, he pulls out his horn, jumps on stage and joins in. One month later, he gets a call from Roy Hargrove to replace David Sanchez in his Latin Jazz band, Crisol. In addition to Hargrove and D'Angelo, Schwarz-Bart has done session work and performed live with Erykah Badu, Eric Benet, Meshell N’degeocello, James Hurt, Danilo Perez, Soulive, Ari Hoenig and David Gilmore, among others. He is one of the first musicians to fully explore the connection between Gwoka and jazz, two musical styles of the African Diaspora.

"It is a sweet listening experience, and downright Soulful!"
Jazz Review