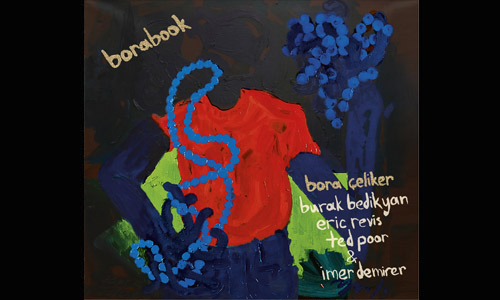 A highly original debut album featuring a great cast of players. Post bop with rock, psychedelic and classical overtones. Borabook features 8 originals by guitar player/composer Bora Çeliker. Written between 2002 - 2010, these tunes reflect the evolution of the artist as a composer. Throughout the album and it's lengthy improvisations, one can hear many distinct inuences such as hard bop, psychedelic rock, avant garde and classical blend in a unique way. The guitar sound and Bora's playing on some of the tracks on the album will appeal to rock audiences, while the tune construction and the overall feel of the album, with its rich harmonic backdrop and playful rhythms will maintain the jazz listeners' attention for a rewarding 76+ minutes.

The band pulls no punches throughout the recording; even in the quieter tracks, there's a lot of intensity and emotion. It has that 'live' feeling. Recorded November 18, 2010, in İstanbul-Turkey, this may well be the most interesting and heart-on-sleeve eort that came out of this part of the world in the realm of jazz and improvisational music.