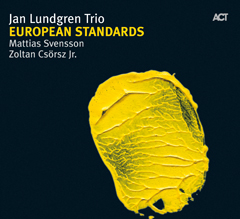 At any rate, Lundgren didn’t make it easy for himself on European Standards. Lundgren recounts that, “we listened to and researched an incredible amount of music. We already had some of the songs in mind, but we were totally unfamiliar with others before we started the project. The Swiss song ‘Stets I Truure’ was recommended to us by a friend. It was the same with the Spanish song ‘Yo Vivo Enamorao’.” It was both logical and courageous for Lundgren to chose an Esbjörn Svensson composition to represent his Swedish homeland. As a concluding piano solo, „Pavane – Thoughts Of A Septuagenarian“ is a gripping homage to his friend and colleague who recently so tragically died.

It is not just the convincing and surprising repertoire that makes this project stand out from other similar set ups; above all it is Lundgren’s amazing ability to masterfully shape the original material into a homogeneous, perfectly flowing, coherent album.