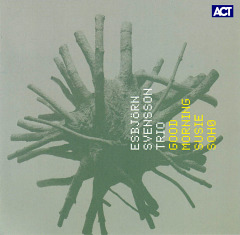 Not so with Esbjörn Svensson Trio. The trio has sold three times as many albums as jazz acts normally do, but they still manage to stay on the good side of jazz aficionados and critics. The trio plays upwards of 100 shows each year to a very varied audience. Besides the usual jazz audience you’d be as likely to spot a little old lady as an advertising exec or high school kids. This year, the trio will include matinees on their tours to give their younger fans a chance to see them live. Their favourite moments are spent improvising on stage, and this is how they keep their material fresh and ever evolving. No two shows are the same and to a large extent, the band tries to capture this loose, improvisational vibe on record, and they rarely do more than one take in the studio. The recording process that led to "From Gagarin’s Point of View" (ACT 9005-2), that also became the first Swedish jazz video shown on MTV, is significant to how the band works: "We were working on another project, and had a few hours to spare, so we sat down and played a few songs", Esbjörn says. "Those songs make up about half the album, with the other half recorded in two similar sessions". "Keeping the spontaneity is extremely important to us", explains Magnus.

The album earned the trio the title "Trio of the Year" by Jazzwise, UK: "Good morning piano lovers - this is an unbelievably essential album"