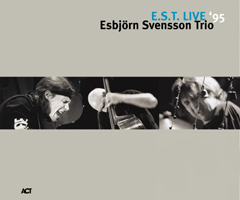 It’s no wonder that, especially when playing "live", EST lets loose an almost unbelievable energy. Esbjörn Svensson himself has stated most clearly how much the music from past periods influences the band; "Obviously we develop all the time, both as individuals and as a group. But development isn’t only about blind process. So instead of just going forward, in places we’ve chosen to refer back to our earlier sound, to what we had on our first two albums." That’s already reason enough to pay new attention to "EST LIVE ‘95".

"Their attachment to deeply felt melody, unhurried intensity, framed with the Nordic Tone, and the comparatively unconventional, pop-like structures of their compositions endeared them to jazz and non-jazz fans alike..."
Jazzwise