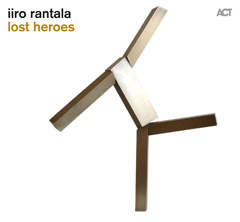 Particularly impressive is the homage to his “Swedish neighbour” and colleague Esbjörn Svensson, whom he ungrudgingly admires and who is also a key to Lost Heroes. On “Tears for Esbjörn”, Rantala captures in a very personal way the shock that the tragic and premature death of the pioneering “pop star of jazz” triggered throughout the whole world. “I was very sad for a long time. Esbjörn’s death started a process and I discovered a whole new level of melancholy in myself. I started to compose music which was simply beautiful and calm and this mood pervades the whole album.”


Along with several other pieces on Lost Heroes, “Tears for Esbjörn” is undoubtedly dark, but beautiful at the same time. Together they result in a modest masterpiece by an all-round piano talent who is yet to be discovered by the broad public. The New York pianist and arranger Gil Goldstein quite rightly said: “"Iiro Rantala is a pianistic sensation who makes the strongest case I know to believe in reincarnation because his pianistic technique and musical sensitivity speak of depths which appear impossible to have been achieved in this lifetime alone.

Finland's piano sensation with his ACT debut: "A superb tribute; a giant of an album."