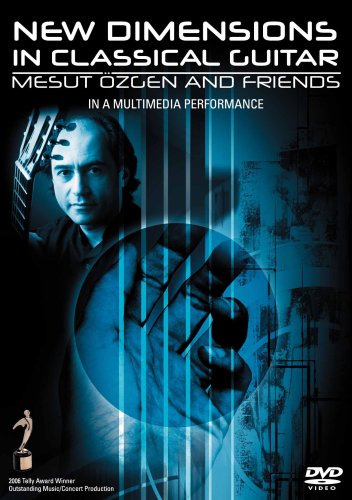 This award-winning DVD features guitarist Mesut Özgen's multimedia concert performances of music by Anthony Newman, Pablo Ortiz, Benjamin Verdery, Anthony Gilbert, Robert Strizich, and Deepak Ram. In March 2004, a multidisciplinary artistic team from the film and digital media, theatre, and music departments at the Arts Division of University of California, Santa Cruz, led by guitarist Mesut Özgen, had launched the premiere performances of a multimedia concert series New Dimensions in Classical Guitar. A multicamera video production crew captured these premiere performances together with the beautiful acoustics of the UCSC Recital Hall. A delightful set of new guitar music is presented skillfully and artfully combined with visual accompaniments, comprising video, digital images, and lights. A one-hour selection from this DVD program was broadcast nationwide on UCTV and won a 2006 Telly Award for outstanding music/concert production. These visually enhanced performances will thrill guitar fans and enlighten a new audience to the unbound dimensions of classical guitar