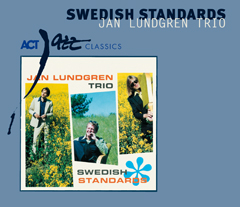 This album partly documents the beginning of Lundgren’s fascinating musical journey, an incredibly atmospheric and tasteful reworking of the rich Swedish folklore tradition. The album when first released was a sensational success in Sweden; it received a whole slew of awards (among them “Best Jazz CD Of The Year”), and even stormed its way up the pop charts. The trio is so perfectly attuned that the listener does not hear how difficult it was to put this music together. At any rate, Jan Lundgren has once again come up with an especially enjoyable album. But then coming from him, perhaps this isn’t much of a surprise.

"Lundgren has a style influenced by Oscar Peterson and the bop pianists, impressive technique and the ability to swing at any speed."
All Music