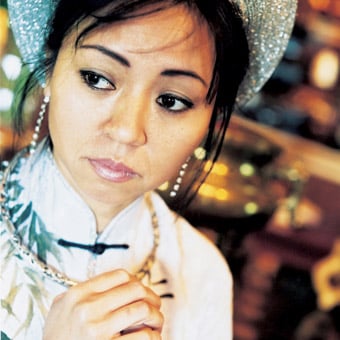 Born in Saigon, Viêt-Nam, Huong Thanh comes from a family of renowned traditional musicians. In Vietnamese singing theres a special and very strong relation between melody and words: there are six linguistic tones, and the same syllabe can have different meanings depending on the pronounced pitch. The poetry of the text has its internal melody, and the singer has to convey the emotions of both. Huong Thanh embodies the particularities of the Vietnamese traditional singing, full of detailed inflections, ornements, finesse and diversity of ex

"It's very moving, Huong Thanh's ability to mix ancient Asian themes and unexpected contemporary influence, all with an exhilarating, cool confidence."
The Guardian