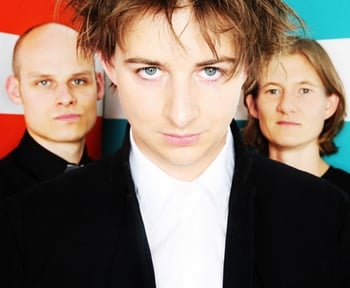 Born in Schweinfurt in 1978 and living in Berlin since 2005, a representative of a new generation of German Jazz musicians and the most promising young talent on the piano, Michael Wollny received piano and violin tuition as a five year-old, and along with classical studies, improvisation was part of the curriculum from the very beginning. He finally discovered Jazz when an uncle gave him an LP of Keith Jarrett’s Köln Concert.

The collaboration of three musicians as equals on a level playing field is the idea behind the trio [em], founded by Wollny in 2002 with bassist Eva Kruse and drummer Eric Schaefer. Something exciting is brewing here: Bavaria, Brunsbek and Berlin. Northerner Kruse studied in the capital and alternates between expressive experiments in the Arne Jansen Trio and the electrifying dance floor beats of the Tied & Tickled Trio from Weilheim. Eric Schaefer may currently be the most interesting drummer in Berlin. He studied with Stockhausen’s drummer Christoph Caskl and has won national acclaim with the band Nickendes Perlgras.

“This is the future of jazz”.
Observer