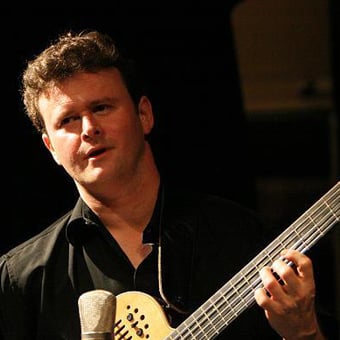 Sylvain Luc was born in 1965 in France. He is a French jazz guitarist. His musicality, his great sense of improvisation and his virtuosity, and unique, technical abilities with the guitar have earned him high praises from all around the world, including from many musicians he has played with such as Dee Dee Bridgewater, Michel Legrand, Richard Bona, Steve Gadd, Biréli Lagrène, Elvin Jones, Wynton Marsalis, Stéphane Belmondo, Manu Katché, Michel Portal, Bobby Thomas JR, Andy Sheppard, Jacky Terrasson and many more. He is very regularly on tour, but very rarely makes appearances in high profile jazz festivals.

His most well known works are the two duet albums with Biréli Lagrène, with whom he has toured many times. He is an ambassador for Godin guitars since 1993. He is very attracted to duets, but has also been seen within trios like his own trio, but also Trio Sud, and on tour in 2009 with Steve Gadd and Richard Bona.

"It sounds as though Luc values every instrument's uniqueness, not just his own."
The Guardian